Pursuant to the rules and bylaws of the Washtenaw County Democratic Party (WCDP) and the Michigan Democratic Party (MDP), the WCDP will hold its November County Convention beginning at 6 p.m. on Monday, November 26th. It will take place at the Washtenaw County Learning Resource Center (4135 Washtenaw Ave.) The rules require us to hold it within 20 days of the November election and the weekend prior to the 26th (the last day we can have it) is Thanksgiving weekend so this is pretty much our only option. This email serves as our official notice which complies with the 15-day notification requirement.

At this convention, we will elect members to the 2018-2020 WCDP Executive Committee. (NOTE: MDP nomenclature refers to this body as the “County Committee”.)

The number of positions to be elected must be equal to twice the number of Democratic nominees for county office, the state legislature, and congress in the most recent primary election.

Convention Rules & Eligibility
A proportional voting method as outlined in Section 6 of the Rules for Voting and Elections in the Michigan Democratic Party will be used. In order to have equitable geographical representation across the entire County, we will continue the past tradition of dividing up the County into sensible regions and assigning the number of representatives from each of those regions in proportion to the number of votes cast for the Governor/Lt. Gov. race on November 6th. This work was done by WCDP member Michael Koen who has done this for over a decade for us. The distribution is as follows:

I’d like to extend my personal thanks to Michael for his work on this. This impartial analysis ensures the entire county is represented on the Executive Committee in a fair and transparent fashion.

Members in attendance at the convention will separate into these groups and choose the people to represent them on the Executive Committee from those in attendance or who have agreed to have their name put into consideration by another attendee in advance of the meeting.

Delegates to this convention will be MDP members, Precinct Delegates elected at the August 7th Primary, Democratic elected officials, and Democratic nominees to partisan office. Articles 3.2 and 3.3 of the Michigan Democratic Party Rules stipulate the following qualifications for candidacy and eligibility to vote:

In order to hold party office or vote at any Convention, Caucus, or meeting at any unit of the Michigan Democratic Party at any level, a person must be a member of the Michigan Democratic Party for at least thirty (30) days prior to that Convention, Caucus, or meeting (October 27, 2018.) A party member must be a qualified elector in order to vote on nominations for public office.

Precinct Delegates, Democratic elected officials, Democratic nominees to partisan offices, and individuals whose membership lapses inside the thirty day window are exempt from the advance membership requirement. However, those individuals must be members in order to vote and may join or renew the same day as the Convention, Caucus, or meeting.

NOTE: If you wish to check your eligibility to vote or be elected to the Executive Committee, please contact me directly and I can check it for you. If we do not have proof of your membership, we cannot allow you to vote at the convention or to run for a position on the Executive Committee. Occasionally the lists I get from the MDP have errors so checking ahead of time is a prudent step, particularly if you joined fairly recently. Email, text, or call me and I am happy to check for you so any problems can be resolved prior to the convention. 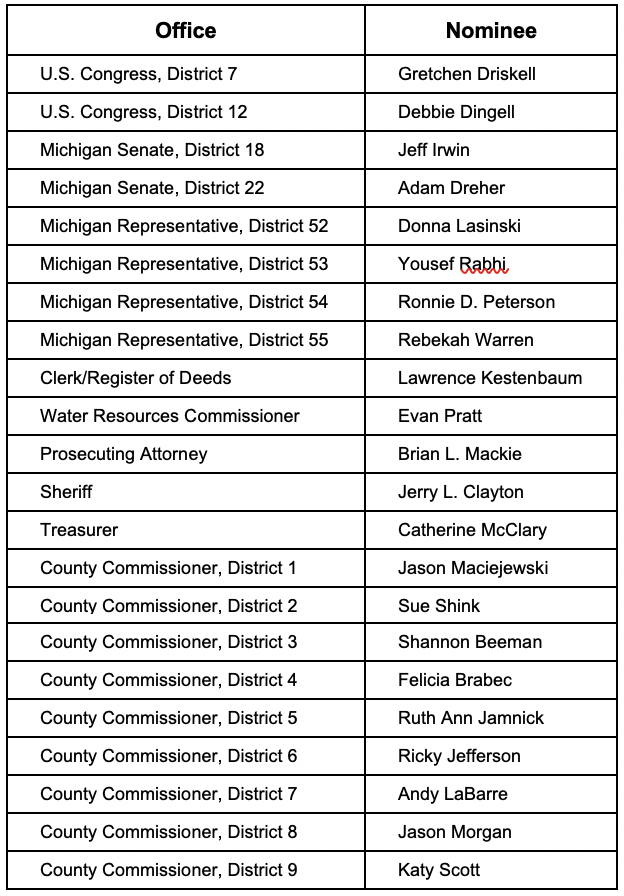 Do you find the rules about our County Convention kind of inscrutable? Yeah, so do we. So we put together this Explainer to help everyone understand WHAT will happen, HOW it will happen, and WHY it will happen that way: